RecycLiCo Battery Materials (“AMY” or the “Company”) is pleased to announce that representative samples of manganese from National Defense Stockpile in Wenden, Arizona were shipped following the completion of the sampling activities announced in the Company’s December 8, 2020 press release. Sample collection is the first step in the Wenden Stockpile project, which is being funded by an award from the United States Defense Logistics Agency (DLA), to confirm the viability of efficient electrolytic manganese metal (EMM) production using AMY’s patented manganese recovery process (US Patent No. 8,460,631).

During the sampling activities, a DLA monitor was present to ensure that proper sampling procedures were adhered to at all times. In addition, Congressman Paul Gosar’s (R-AZ) field office staff, Penny Pew, visited the Wenden Stockpile in support of the project’s potential to create a domestic supply of manganese production, for which the U.S. has been 100% import-dependent since 1973. During the 2-day process, a total of approximately 550 pounds of material was collected in 16 commercial-grade-heavy sealed buckets, with sample locations geo-tagged. 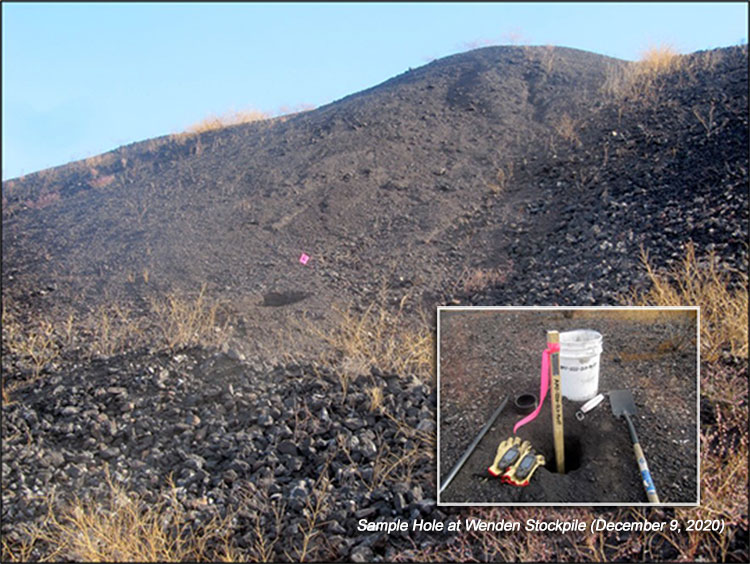 The Wenden Stockpile contains approximately 322,000 metric tons of low-grade manganese, which was purchased by the U.S. Government in the 1950s and 1960s. The stockpile has been inactive due to the need of specialized processing methods to transform the low-grade manganese into useful forms of advanced manganese material. If RecycLiCo Battery Materials is successful in its bench-scale testing project, it could provide an opportunity to build a processing facility to transform the sub-economic manganese resources into a valuable source of EMM.

“We are thrilled to complete the sampling work ahead of schedule, especially as we get into the holiday season,” said Larry Reaugh, President and CEO of RecycLiCo Battery Materials. “In the awarded project timeline, our next step will be to conduct assays and leach tests on the samples, which we plan to report in the new year as data is received.”